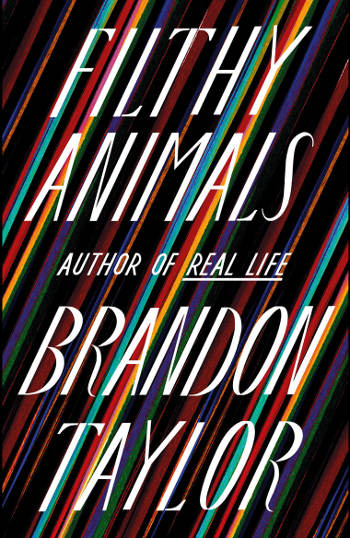 When Brandon Taylor read an excerpt from Filthy Animals (Riverhead Books; out June 22) as part of the Mission Creek Festival Duos programming at the end of April, I was riveted. His language is made to live like that, off of the page, as much poetry as prose. But it is just as compelling in print, and the 11 stories that form this collection are a joy to devour.

Filthy Animals is unflinching in its grounded views of relationships and introspection. Taylor draws characters like he’s channeling Tom Stoppard, revealing them in their conversations, projecting them off the page like they’re standing beside you. These are not characters, they are people, whole in a way that is almost jarring.

The lead voice throughout is Lionel, a mathematics graduate student whose recent suicide attempt has left him in limbo, no longer in his program but not ready to take a next step to something new. He is a shatterstorm of anxiety, in a way that makes me, personally, feel more than a little called out. He balks at conversation; when people ask him questions, he answers with a burning eloquence — in his mind, and then rejects himself and gives verbal answers that are short, self-deprecating and/or noncommittal. He is ur-awkwardness. And in later stories in the book, when he finally (occasionally) says what he is thinking, it feels like you are being born with him into some new negotiation with reality.

Other stories take the perspectives of people in Lionel’s sphere of influence, some intimate, some tangential. Still others lay on the outskirts of it all, seemingly unconnected but all caught in a swirl of language and longing that makes them kin to each other. The collection begins with a quote from the Bible: “If you were of the world, the world would love you as its own.” This is Jesus’ admonition to his disciples about the opinions of the world against them. “Instead,” John 15:19 concludes, “the world hates you, because you are not of the world, but I have chosen you out of the world.”

The stories in Filthy Animals are all of people who have been chosen out of the world, who are in many ways hated by the world — but Taylor’s choice to quote only the first half of the verse is an echo of the longing threaded through the book. These are exemplary people; all of the characters stand out for one reason or another, the smartest or the most talented in their fields. But they seem to seek a sense of normalcy, some whiff of belonging. They crave connection, are not ready to embrace that which sets them apart.

Which, I suppose, is to be expected of 20-somethings scrambling to define their place in the world. But to boil this book down to post-collegiate stress disorder, to distill it to only the angst of early adulthood, would be a deep disservice. Taylor has crafted a raw slice of humanity that will catch you in its synaptic wordplay and release you into its emotional resonance. I promise, you will find yourself somewhere in this book. And it will make you glad to have been chosen out of the world.

This article was originally published in Little Village issue 295.