An Ice Cream Truck Stalled at the Bottom of the World 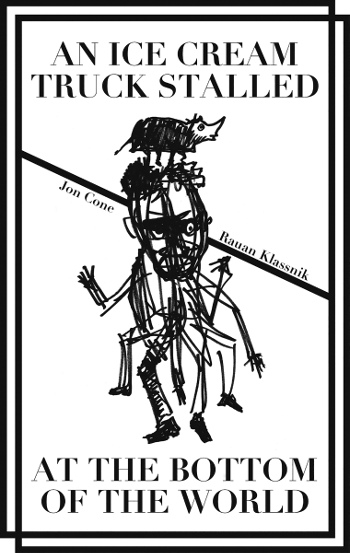 Most plays tell a story, taking audiences for a ride of plot twists and turns, perhaps inspiring laughter or tears or heartbreak along the way. Other plays take a different road, focusing more on tone and mood — a journey evoking difficult-to-process feelings and challenging audiences in ways that stick long after the play is over.

An Ice Cream Truck Stalled at the Bottom of the World by Jon Cone and Rauan Klassnik is a collection of plays that takes the latter track.

No play in the collection is very long — some are as short as five pages — but there is so much packed into each page they require multiple readings just to absorb the action and embrace the tone. Two characters recur in each play: Pog and Gomey. They are described as “men, barely.” Gomey is the more aggressive of the two, while Pog feels more like a blank slate.

Neither are fully realized characters in the script, though with smart choices by the actors, they could become so. The only other named character is Artaud, the French theater artist who created the Theatre of Cruelty movement, which focused on assaulting the senses of the audience.

The real Artaud’s influence is clear, as most of these plays have stage directions suggesting vague but intense sounds, such as “the pained roar of something like a lion” or “Music plays low. The overall effect is modern but foreign, vital but bloodless.”

The stage directions throughout all of the plays are often illogical and suggestive of mood rather than reality. My favorite is “Kittens roam freely all corners of the known universe for the duration of this performance.” As a director, my first thought is, “What the heck am I supposed to do with that?” And my next thought is, “OK, let’s think about how to suggest that to the audience.” These plays challenge directors and actors alike, and that’s a powerful point in their favor.

There’s also an absurdist bent to this collection of plays. Pog and Gomey evoke the main characters from Samuel Beckett’s Waiting for Godot, though neither appears to be waiting for anything — they are purposeless and uncertain. Still, there’s a sense of uncomfortable longing that glides through every play. It’s never clear what anyone is longing for, but that is most likely the point. As noted, none of the plays have a clear plot, but all exude and elicit those intractable emotions, from anger to sadness to confusion.

One of the most powerful effects of theater is to challenge the audience. But challenging the audience is just the beginning of what these plays do. Cone and Klassnik have created a series of plays that confound our senses, confuse our minds and force us to confront discomfort. You will not emerge from these stories unscathed.