Three city council members–the estimable Mike Wright, Regenia Bailey and Ross Wilburn–have announced that they won’t be running for re-election this fall. Also Mayor Matt Hayek, though he will be looking to retain his at-large seat. That means no fewer than four council seats are in play.

I want you to run. I even put the voting pattern maps online to show you how. Visit LittleVillageMag.com/yourtownnow.

On June 1, after my column is due, the city will have information packets for you detailing exactly how to run for office. I’ll post what I can on my Facebook page, but for now, a few bits to get you started:

To appear on the ballot, you’ll need to fill out a petition signed by people eligible to vote in Iowa City. Our charter stipulates that the number of signatures gathered must represent at least 2% of the number of people who last voted for the same office. Last time around, 4,685 people voted (fewer than 10% of all eligible voters!), so count on gathering 95 signatures. The official deadline for submitting petitions is 40 days before the election, or late September.

Win, and you’ve got a council seat for four years. Go get ’em.

The city council officially fronted the Moen Group $250,000 for an estimated $1 million rehab job on the former Vito’s. The deal is being pitched as representing 12.5% of the project’s total $2 million cost, but to be fair, $1 million of that went to Moen’s purchase of a handsome, 112-year-old, 9,000-square-foot building. That’s roughly $111 per square foot, a nice deal for Moen on a fixer-upper. The city’s really underwriting a quarter of the projected cost of upgrading the building.

Some local media outlets reported this as a grant, but the money is slated to be repaid through a tax increment financing (TIF) arrangement. The TIF plan will last for eight years, during which Moen agrees that the property will be assessed at no less than $1.56 million, and during which he may not lease any part of the building “as an eating and drinking establishment, restaurant, or residence.” So retail.

Happily enough, city economic development officials project $31,250 in extra property tax revenues from the newly rehabbed space, exactly enough to cover the cost of the advance. A skeptic might say that we’ve just given Moen an interest-free loan in exchange for the opportunity to gamble that we won’t lose money in the bargain.

An optimist has to look at the deal’s broader implications for a whole lot of comfort: This works if businesses surrounding the rehabbed space benefit, too. Moen’s challenge is to add a retailer that generates its own audience and keeps it downtown to shop at other stores. To my ancient mind, that sounds a lot like the old lie “a rising tide lifts all boats.” We’ll learn soon enough about the tenant Moen thinks best fits the bill.

Former Vito’s owner Mike Porter might’ve been surprised to see that another one of his bars, The Summit, was denied liquor and dance permits. That’s what it said, at least, in the minutes of the May 3 city council meeting posted on the city’s website. It takes some digging through the information packets distributed weekly to council members, though, to find that the permits weren’t denied after all.

Maybe someone was on a roll: Porter’s record in these sorts of proceedings isn’t exactly perfect, and city staff might’ve gotten used to writing “Staff recommends denial” whenever one of his licenses comes up for renewal. But wow. For all its authority in municipal matters, I never thought the city government had the power to make me feel badly for Mike Freaking Porter!

The Pedestrian Mall got a couple of minor tweaks in May. For starters, nonprofit organizations with presences on the Ped Mall will no longer be allowed to accept monetary donations. This stupid change is designed to avoid conflict with the city’s stupid anti-panhandling ordinance. It’s also designed to irritate police by putting another rule on the books that, if taken seriously, would further divert resources from things like fighting actual crime and preserving the peace.

Well, okay, it’s really just the work of a bunch of busybody Chamber of Commerce types. And it could’ve been more restrictive: City staff recommended that no one be allowed to set up tables on the Ped Mall for any reason.

Which brings up another reason for you to run for city council. A lot of the decisions I discuss here–and plenty of others that affect the quality and character of life in our city–start out as directives or recommendations from city staff. Those folks aren’t elected and work under a different set of presumptions and expectations than does the council. They make decisions based on their expertise, which they’ve developed by focusing their professional attentions on certain areas. So the council is there, in part, to balance recommendations made by staff who aren’t paid to look over their shoulders and consider every single social and cultural ramification of their suggestions. You should be part of that balance. You should be on city council.

Division in the ranks

The current council seems to like voting unanimously, but May saw dissenting votes on a couple of matters covered in recent editions of Your Town Now.

Councilors Connie Champion and Mike Wright voted “No” on rezoning a parcel of land near Dane Road and Mormon Trek from agricultural to intensive commercial.

As I mentioned last month, the council voted to drop the fines for under-21 violations. May saw the second of three votes on the matter; the current motion sets the penalty for first-time infractions at $300, $500 for second-time violations and $625 for those who still don’t get the hint. Matt Hayek, Susan Mims and Mike Wright voted “No” to the measure.

The University of Shopping Centers
The council deferred a vote on a resolution to pay John Millar of Divaris Real Estate $50,000 as a consultant on downtown development. A companion measure authorizes the city to work with the university in this effort, with the UI kicking in half of Millar’s fee.

It’s not like Millar lacks serious academic credentials. “John,” Divaris’ website gushes, “a Certified Senior Shopping Center Manager (SCSM), has been a faculty member of the University of Shopping Centers.”

I couldn’t not quote that. A bit more seriously, Millar’s name has been banging around city and university circles for a while now–he spoke here in February and I discussed him in the March issue of Little Village. A city that’s gone condo-crazy in recent years is about to bring on board a developer of “lifestyle centers,” a developer who might not draw as clear a distinction between neighborhood and mall as the rest of us.

Nothing against Millar–he’s apparently good at his job. If he’s caught the attention of our top officials, that speaks well for his business sense and ill of our government’s drift toward the Chamber of Commerce set.

Elliott Higgins, Student Government Liaison, got approval of an expanded Informational Disclosure and Acknowledgment Form; it will now include info about Iowa law regarding security deposits. Good on ya, Elliott!

How to Win Election to the City Council

Here’s where people voted in the last city election. The darker the shading, the more folks voted. 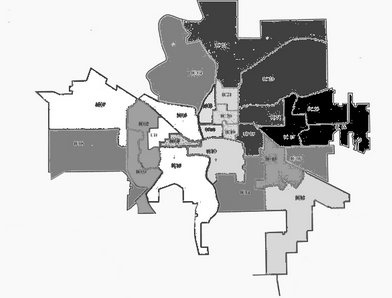 And here’s where the last two at-large winners, Terry Dickens and Susan Mims, got their votes. 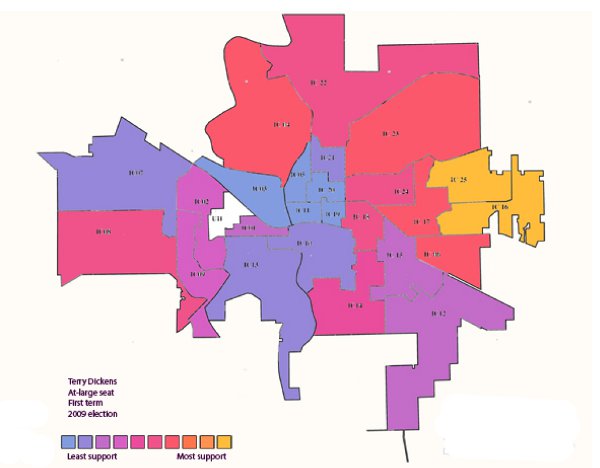 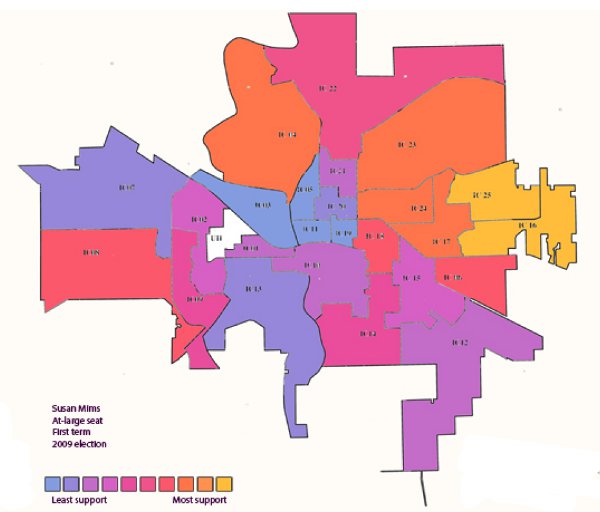 See the pattern? For the two at-large seats, get thee to the east and north sides, and win those. Winning your own precinct couldn’t hurt, either.

Yep, it’d be a beautiful world if more than 10 percent of us voted, and if some neighborhoods didn’t voluntarily take themselves out of the process. If you can change that, my hat’s off. But chances are that you’ll need to win most of the precincts where people actually vote.

For Wilburn’s District A seat, you’ll need to make the election relevant to people and make sure everyone knows both how to get to their polling places and how to vote absentee. Winning those few precincts with historically decent turnout is probably a good idea, too.

There you have it: easy-peasy. Thank me when you win.