Comedy is a field historically dominated by men. As many comedians profess, there is an ever-present, underlying need for attention and approval that often drives them to the stage. Many of these men balance the nuance of a need to please with a talent for humor and create genuine comedy. When less talented comedians attempt this, they often rely on unoriginal material that very frequently involves stereotypes and ignorance.

Recently, there have been well known comedians in the latter category making the news. Daniel Tosh, whose Comedy Central show features his unimaginative commentary on internet videos, earned criticism for joking that a heckler should be gang-raped on the spot for saying rape jokes aren’t funny.

When women are the objects of a “joking” instigation of an act of violence that one in three of them will experience in their lifetime, it’s hard to see why this is a defensible strain in comedy. But it’s feverishly defended. In yet another recent “rape joke” incident, comedians like Patton Oswalt publicly scoffed at criticism and complaints by feminists (of whom many are men) that these jokes not only weren’t funny, but that these comedians should even be questioned at all by those outside of the comedy circle.

If you think this is an issue found only in the dark corners of America’s comedy clubs, I present my recent experience of vitriolic, rabid sexism in comedy.

I am somewhat involved in the local comedy scene in Iowa City. When I say “somewhat involved,” I mean I have friends who perform. I actively promote and support their shows, and I make sure to laugh really loudly at their knee-slappers. I do my best to go toe-to-toe in terms of quality jokes over the interwebs and in person with these comedian friends, and, since we are all attention-hungry at heart, I would say I have a decent sense of humor. I’m no stand-up comedian (YET), but I am happy and eager to engage in the local comedy scene because I see comedy’s inherent value in our society: it fosters a sense of camaraderie, it (if it’s good comedy) humanizes the person on stage, and to hear a truly hilarious joke is one of the few unadulterated happy feelings left in our sick and squalid world.

Some comedians are under the impression that trotting out stereotypes of historically disadvantaged populations is groundbreaking, new material.

They operate under this fallacy, in part, because some of their fellow comedians are reluctant to call them out for it, but more on that in a minute.

It’s no secret that white males are among the least disenfranchised/discriminated against members of society. And comedy does not exist in a vacuum; the comedians most conspicuously guilty of very unfunny bigotry disguised as comedy happen to fall in this category. A white male comedian does not have to apologize for being a white male, and no critic has ever staked that claim. Also, crass humor is not inherently bad. Crude humor is one of the ways comedians humanize themselves, as it lets the audience relate to some of the more embarrassing and darks thoughts we all have. But this is not crass. At an alarming rate, some white male comedians are not only using their platform to perpetuate sexist/racist/homophobic “comedy” but also to viciously attack any critique on it. 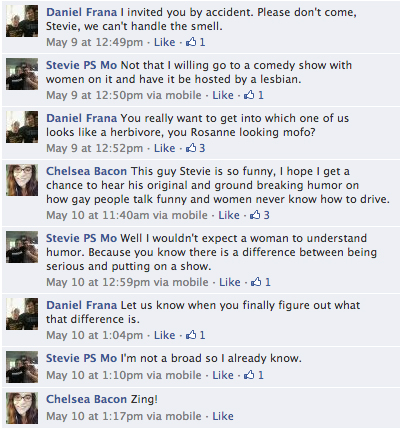 I recently found myself the target of such an attack. A comedy show featuring local comedians was advertised through an events page on Facebook (see event/thread). Enter white male comic–podcast and all–commenting that he wouldn’t go to a “comedy show with women on it and have it be hosted by a lesbian.” Get it? It’s shtick. Making fun of women and lesbians is funny because duh. But if, like me, you started rolling your eyes the first time this “joke” was told, by now you are starting to be fed up.

I replied with a sardonic but not angry hope that I would have a chance to hear this guy’s original and groundbreaking humor on how gay people talk funny and women never know how to drive.

The candor of the comment section quickly devolved. Some of the “shtick” hurled back at me included: “Listen here whore. You are the only one taking anything seriously. Why don’t you go be a uppity cunt elsewhere. Why don’t you try to be original for once rather then cry like a liberal bitch.” [sic] He concluded on several accounts that he was better than me; one of the reasons being that he was not the whore.

This is not good comedy. This isn’t even comedy. This is yet another example of the dark side of comedy. The notion that it is a boys’ only club; that women can and should be shamed out of the “artistic process” of comedic critique. This is sexism permeating comedy, signifying that it is okay and welcome to call a woman a whore because she told you your joke sucked.

And he and those alike get away with it because fellow comedians fail to see the blatant bullshittery that is the ability to promote outright bigotry and uncalled for hatred of a woman, who was a “whore” who started “running her trap.” This is not an example of a garden variety internet troll, whose provocations are reliably exercised and best ignored because of their obvious attempt at lowest common denominator instigation. This is a violent belief that women who speak up in comedy deserve to be mistreated, and it is encouraged and nurtured when bystander white male comedians discourage any objection.

Several of the men tried to, misguidedly, explain that simply responding to someone like this is only adding fuel to the fire; I was only “giving him what he wants.”

It’s a phenomenon in comedy that criticism can only give power to the wrongdoer. It is, in effect, telling a woman that pointing out injustice is against her best interests. It takes away her ability to participate as an equal. It assumes that the louder, violent voice is unquestionable, and that women and minority groups are powerless to change behaviors that affect them. When these bystander comedians told me that my silence is best, they signaled to the original offender that his comments were free from consequence. And they signaled to me that, as a woman who is tired of hearing sexism in comedy instead of original, creative humor, I am not welcome in the comedy world. That comedy is exclusive to those who think alike, and there is no room for dissenting voices. This isn’t comedy either.

Comedy is not assuming zero responsibility over your actions. It is not telling others how to respond. It is not demonstrating the utmost hypocritical behavior in making callous, lazy, ignorant statements and then lashing out aggressively against critics. Comedy is not free from criticism. This is not an echo chamber containing only yourself and a couple other people exactly like you. You won’t need to do any of these things if you want to be a good comedian, or a decent human being for that matter.