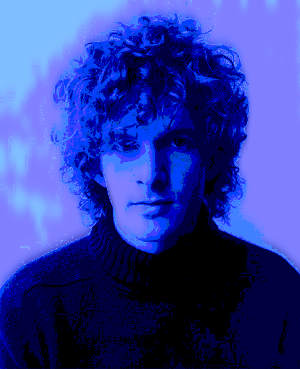 Scott Miller leader/song-writer for Game Theory and The Loud Family died Wednesday, his website announced. Even though he was never a widely known artist, he had enough fans among music journalists and critics to rate obituaries in Rolling Stone, USA Today, and The Guardian.

Miller’s bands had some passionate local fans; Game Theory played Gabe’s in 1987, and the Loud Family came through in 1993. I was lucky enough to wander into the old Record Collector for an in-store by Miller, where he effortlessly performed several songs, playing a guitar borrowed from Kylie Buddin.

If you want to know Miller’s music, it’s easy enough; the out of print Game Theory records–made available by Towbridge–are availale for download at these locations: 2 Steps From The Middle Ages, Lolita Nation, The Big Shot Chronicles, Real Nighttime, Distortion Of Glory, and Tinker To Evers To Chance.

The last album may be the best place to start, as it is Miller’s selection of songs from the Game Theory catalog. If those links go down, the files are collected in one zip file here.

What marks Miller’s songs as unique is his obsession with coming up with a perfect, and perfectly new chord progression. Like his hero Alex Chilton, he had a fondness for accessible pop music that had lots of moving parts under the hood. Lyrically, he was both class clown and over-achiever. He wanted words as devious and pretty as the best lyrics of Stephen Sondheim and Jerry Lieber, but shot through with almost Joycean obscurity and puckish humor. Just the name of his last band, Loud Family, is a multilayered joke, referring back to the Loud Family of the 1970s PBS Documentary An American Family, and the ’70s Saturday Night Live skit about a family that yells, and Loud as in loud music. And he loved a great song title: “Don’t Bother Me While I’m Living Forever,” “No One’s Watching My Limo Ride,” “Exactly What We Don’t Want To Hear.” In every way imaginable, Scott Miller’s songs were deep stacks of meaning and serious musical business, compared to the single ply toilet paper most pop music is made of.

Miller also had an long-standing web presence–his day job as a software engineer made him something of an early adopter–at the Loud Family web site. His long running “Ask Scott” column used questions e-mailed by fans as the springboard for his writing, which was every bit as literate and entertaining as his songwriting.

His book “MUSIC: What Happened?” started as a series of blog posts. The set-up is that for each year starting with 1957, Miller was programming a CD mix tape of the best music of that year, according to his own highly subjective, but transparently argued standards.

Imagine non-criticism music criticism, written by a musician who is a fan first and last. Miller had the ears and experience to unlock why songs are great, and do so with wit and unassuming erudition. By no means is he an obscurantist–there are plenty of well-known hits here. His description of songs you’ve heard a million times can change how you hear them, and the illuminating attention he gives the songs you know makes you want to seek out the ones you don’t.

He has his hobby horses; no one I know is as in love with Chris Stamey and Mitch Easter as he was. But his tastes were broad, encompassing rock, jazz, soul and even show tunes. What made a song special to him was craft–both in song-writing and production–and surprise: those little unexpected chords or lyrical twists that are the secret sauce of great popular music.

Beyond the subject matter, Miller’s book is remarkable for its voice. His relationship with music was more an enduring love affair than a career. He was as commercially unsuccessful as he was artistically successful. He kept his sense of humor–referring to his career progression as going from “regional obscurity” to “national obscurity”–and the pure pleasure he found in making and listening to music was deep and abiding.

Luckily he was also scary smart. He was able to work in the software industry, get married and raise a family, without giving up his avocation as a songwriter and musician.

He died much too young–at 53 he was a couple years younger than I am–and it’s sad that a lot of people are only getting to know his work now that he’s gone, but better late than never. And Miller was enough of an old trouper to know the advantages of leaving us wanting more.

A Smattering Of Songs

A smash hit that never was.

The best Star Trek fan song in the world.

The most resolutely depressing song I know. The lyric is a beautifully wrought extended suicide note. When I heard of the death of David Foster Wallace and the depth of the pain that drove him to suicide, this song started playing in my head. On the other hand it is chock full of the deftly worked song-writing detail that Miller was such a wide eyed fan of in other songwriter’s work. I tried to learn to play it once, and though it has a weightless lilt to the ear, there’s plenty of heavy lifting going on in the chord changes.

“Curse of the Frontierland”

‘Lost to your mascara, I used to like your eyes.’

Scott Miller loved the Vince Guaraldi music for the Peanuts Television Special as much as I did.

“Exactly What We Don’t Want To Hear”

“We Love You Carol and Alison”

‘In your crassest hour the charm still works on me’

‘All advice is ways of saying “let it go”/Some form of “smile, the world has found a way around the issue”‘