While smart corporations rightly identify creativity as their most precious commodity, far too often higher education is stuck in an old Industrial Age model that rewards students with the best memories and the highest scores on bubble sheet exams. The good news is that it doesn’t have to be that way.

The great Kurt Vonnegut, author of such classic works of literature as Slaughterhouse-Five and Cat’s Cradle, understood the spirit of a true academic adventure. Addressing his 1965 Writer’s Workshop class as “Beloved,” Vonnegut described the twist and turns their inquiry together might take. “As was said to me years ago by a dear, dear friend,” Vonnegut wrote on the course syllabus, “‘Keep your hat on. We may end up miles from here.’” As my class prepares to spend the next two months 1,600 miles from home, Vonnegut’s words seem almost prophetic.

This spring the University of Iowa’s new course entitled “Reimagining Downtown” linked 14 undergraduate students with Zappos CEO Tony Hsieh’s visionary $350 million dollar Downtown Project initiative in Las Vegas. Mr. Hsieh provided the students with a $50,000 budget and charged them with creating an idea that would contribute to the Las Vegas community. He also requested that the class spend its spring break exploring the city, learning both what it needs and cares about. 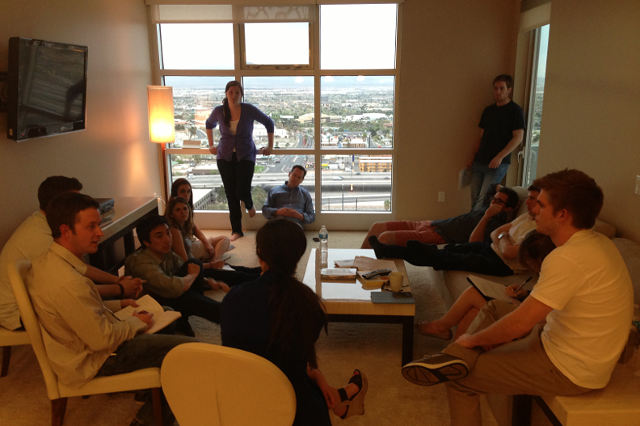 At the end of the spring break visit, the students pitched their three best ideas to Tony and two of his senior leaders. One plan proposed to connect the bleak 12 block stretch between Freemont East and the Art District with a series of public art pieces; the second suggested using interactive games to accelerate “serendipitous collisions” on the downtown streets; and a third argued for a food truck serving raw, vegan treats, while inconspicuously educating the Las Vegas community on eating right.

The gathering took place in what will soon be the shopping, dining and entertainment destination known as Container Park. But on this day, the students made their presentation standing on fake grass, sandwiched by a couple large trailers, as the three executives eagerly listened from a kid’s picnic table. It was a great moment. Tony found each of the ideas interesting, and encouraged the students to continue developing them when they returned to Iowa City. He also cautioned that while many people can come up with an idea, very few have the ability to actually execute it.

Over a year ago, when I first began daydreaming about creating this class, I worried about the same thing. I knew once this endeavor was started, the students and I would be writing our story as we went. While the freedom to create “anything” is electrifying, working in ambiguity can be paralyzing as well. I learned several years ago that the simple act of calling something an “experiment” somehow diffuses the pressure. Experiments by their very nature are about trying something new, and while the potential for failure is always there, the possibility that something magical can happen exists as well. In fact, I’d argue that this is where magic is most often found.

Once back on campus, the students produced business plans for the three ideas, and defended them in our own version of the reality TV series Shark Tank. While the proposals continued to improve, the semester was beginning to slip away. Still no closer to a decision, the class decided to send the three plans back to Las Vegas and let the community decide. After all, it was the needs of the community that we were trying to serve.

On Monday, April 8, just a few hours before class, I heard from Mr. Hsieh. The food truck proposal, carrying vegan gelato to the people of Las Vegas, had been selected. The truck would be coupled with a creative education program, bringing both the product and the science behind it into the metropolitan schools. That afternoon, I shared the news with the students, as they sat outside, shielded in the shadow of the Old Capitol. I feared that the students who had steadfastly committed themselves to the two proposals not chosen would be disappointed. The prevailing emotion, however, was quite the opposite: The students celebrated being together again, focused on a singular objective.

In the weeks that followed, the students established committees and set about planning for their summer launch. The initiative was soon branded “Sugarcoat,” with the educational component called “SugarcoatED”. As the students explained, the verb sugarcoat means “to make (something difficult or distasteful) appear more pleasant or acceptable.” To help insure the initiative’s sustainability, the students partnered with Las Vegas author and nutritional mixologist, Shane Stuart.

While the course was entitled “Reimagining Downtown,” the larger discussion may have been about reimagining education. What happens when you remove the traditional “carrots and sticks” that tend to keep students in place, and instead trust their innate curiosity to guide the way? What happens when the threat of rote exams and mandatory attendance is removed? When students take notes because they want to remember a point, and not because they fear having to recall it? When the objective is not simply a “grade,” or hours toward a major, but a deeper, more meaningful education? The answer is that students will do amazing things!

Someone recently asked me how I will ultimately measure the success of the class. From a practical perspective, it will be whether my students are able to get a mobile food truck and an educational program up and running by the end of July. The personal calculation, however, will be much less precise, and will take a little longer to determine. It will be the duration of the students’ friendships, the deepness of their memories and how this experience influences the trajectory of their lives. Stay tuned …

I would like to thank Associate Dean Dettmer for her deep commitment to students and unwavering support; Jeanne Markel, Zappos Downtown Team Director, for her help facilitating this experience; Zappos CEO Tony Hsieh, whose bold model of making a difference inspires others to be more courageous and compassionate; and my students who already know how I feel.