Faced with a senior design project, Avery Bang and four of her civil and environmental engineering classmates proposed a radical idea to their professor: “What if we actually built something?” As Avery says now, “To see something from concept to implementation was not an experience I had ever had, and I was about to graduate as an engineer.”

With a $50,000 budget, students in Gould’s Reimagining Downtown course will concept, design and execute a real-world building project in downtown Las Vegas. Follow the Reimagining Downtown class right here on Little Village to view their proposals; learn how their plans develop while visiting Vegas over Spring Break and discover which plan will become a reality.

While 20-somethings have a unique generational “voice” to offer society, a lack of opportunity, resources and experience often holds them back. This is a loss on both sides. Not only do our cities and communities need their energy and idealism, but young adults need real-world laboratories to start constructing their contributions as well.

Young people also have the capacity to dream big! While frequently dismissed as youthful innocence, those who find a way to protect that fragile quality often make the greatest difference in the end.

Zappos.com CEO, Tony Hsieh is just such a person. From running a pizza business in college, to the $265 million sale of his internet advertising network, LinkExchange, to the reinvention of corporate culture and customer service at Zappos, Tony has been building one big idea on top of another for years. But it is his latest endeavor that has him climbing the steps of the high dive, and asking the boldest questions yet:

What if a company’s value is not measured solely by the bottom line, but also by how well it enriches the lives of the community in which it resides?

What if the start-up skills of a social entrepreneur could be put to use to create the most community-focused large city in the world?

The first phase of Tony’s plan involved buying Las Vegas’ old City Hall–in the heart of the struggling downtown–to become Zappos’ new home. But instead of reconditioning it into another stunning corporate campus, Tony decided to invest his money elsewhere … to the tune of $350 million dollars … in the community around it. The budget is being allocated in the following way:

Last August, I decided to travel to Las Vegas and see what is now known as the Downtown Project for myself. While there is still much work to be done, the breadth of the undertaking is inspiring. At the end of the week, I had lunch with Tony and he asked me what I thought. It was an easy question, and I jumped to share how much I wanted my University of Iowa students to somehow plug in to his bold experiment. My proposal was to create a semester-long, interdisciplinary class around it. 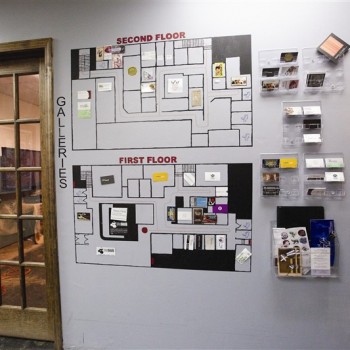 Rather than more mock exercises and bubble sheet exams, these upper-level undergraduate students would focus on creating something “real.” Tony requested that the class spend Spring Break 2013 in Las Vegas to understand the area and offered to host their stay. He then set a $50,000 budget and June through July of this coming summer as the time-frame to execute whatever the class came up with. Before our food had arrived, the Reimagining Downtown course was born.

After a rigorous application process, 14 students were selected to participate in the adventure. They stretch from a dance to a finance major, and dispel every myth that implies young people are somehow self-consumed or unmotivated.

Tony and I had serendipitously met several years earlier when I stumbled upon his book, Delivering Happiness. I was planning on using the book in a new class and had invited him to record an interview over Skype. Tony said “yes”, and then, realizing he would be traveling through Iowa City on his book tour, suggested we conduct it in person. I noticed the proposed date fell on the second week of the semester and responded, “Why don’t we do it in front of my class?”

As I have shared privately with Tony, and publicly to hundreds of others, Tony’s visit was a defining day in my academic life. Do you want to know what my students–and for that matter every student–silently craves? What makes learning come alive and sets their hair on fire? As with most secrets of the universe, it’s incredibly simple. They want to be inspired. Do you want to know how class ended that day? With 80 students gathering up their belongings, following Tony across campus to his tour bus, and continuing the conversation. I have tried to honor that experience and keep the discussion going ever since.

Armed with concerns over food scarcity, healthcare, financial education, the role of the arts and much more, the Reimagining Downtown class departs for Las Vegas on March 17 to begin our lesson in community building. The BIG bet is: If this course can help manage the barriers to entry for these students, can they come up with something truly remarkable? I think they can!