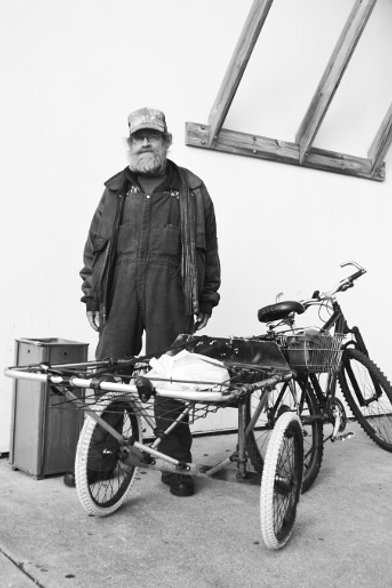 It was a home game a few years ago when I first saw Dog, whose real name is Frank Webb, guiding his bike and cart loaded five feet high with the day’s haul. He was winding his way between dense crowds of fans, ignoring the noise as he stopped intermittently, and adding to his already massive pile.

“I don’t go up to the games anymore,” Dog said when we met years later at the Salvation Army on Gilbert Court. It was a Sunday evening during the five o’clock dinner service. “People try to give you drinks, you end up with more full cans then empty ones. I don’t need that.”

“They’re doing another story about me for the paper,” he announced to the dinner crowd as we walked in and sat at the table with the pre-made salads. It was 4:45 and people were already lined up to the door. He told me about how he’d been homeless since getting out of an Illinois reform school in 1983. “They never convicted me of anything, but the judge said I was incorrigible and they ended up not letting me out till I was 21.”

At 21 years old and without any work experience or education, Webb ended up back in an institution after being convicted of armed robbery of a convenience store. When he got out a few years later, he found himself in a similar situation as before.

“I never had a job before and no one would hire me. So I ended up riding the rails.”

Webb told me of how he had bisected the country riding rail, learning the routes and tracks via maps in the public library. He told me about visiting Times Square on New Year’s Eve, New Orleans on Mardi Gras, and Sturgis during the great motorcycle rally. “One year I went down to South Padre Island during Spring Break. That place was one big party.”

He agreed to let me follow him on his can-collecting route, so on Saturday morning around 7 a.m., as the game day tailgating was just starting, I met Webb at his campsite (he asked me not to disclose the location).

The tarp on his dome tent is covered with layers of blankets to help keep in the heat of his small gas stove. The tools of his trade consist of a 15-speed Huffy mountain bike with which he pulls a small aluminum-framed, two-wheeled cart. The cart is a three-foot by five-foot platform supported by two 10-inch wheels. It is attached to the bike with two metal eye hooks, allowing the whole thing to move and turn without tipping over. Elastic cables hold down bags of cans and bottles as they rise higher and higher from the platform.

His route, which he completes every day of the week (except on Tuesdays when he does laundry), begins on Ellis Avenue, where eight or so fraternity houses face over the river. On this Saturday morning at 7 a.m., pregame festivities have already begun. Taxis pull up and leave and a few young men stand around in Hawk gear drinking. “You guys ready for the game or what?” Webb yells out to them as we go by. Referring to the area as “frat row,” he lists it as one of the most profitable places on his route. “After game day, I’ll come up here and all of these dumpsters will be full of cans.” That morning, however, pickings are slim. As Webb closes the lid to the dumpster he yells back over at the guys, joking that they haven’t left him any cans to pick up. “We’ll leave them out here on the porch once they are empty,” one of them yells back.

As we roll away, he tells me this is part of his strategy, “Now when I come back they’ll have all those cans bagged up and waiting for me. Saves me a lot of trouble. That’s why I say hi to everyone, try to be friendly. You don’t know who might be able to help you out.”

Webb recognizes and deals with the many challenges of living outdoors year-round. He recalls rescuing a friend who had fallen through the ice into the river. “We pulled him out and took him up to Mercy, and they took really great care of him.” Still, he does not wish to move inside. “I tried living inside for a while and I just kept coming back to the streets.” He recalled leaving his wife for days at a time. “She would always come and make me go back inside but eventually I just told her, ‘That’s not me. That’s not what I want to do.'”

After leaving Ellis we proceeded across the river to Dubuque Street and a few more fraternity dumpsters. From there we went South to the Wesley Campus Ministry, where in the basement, as part of the Free Lunch Program (FLP), breakfast was being served. Mary Palmberg, who coordinates the FLP, says they have over 900 volunteers. “Between the FLP, The Crisis Center and The Salvation Army there is a lot being done to help people like Frank.” While Webb’s lifestyle speaks volumes of self-reliance, it is not one he lives without assistance, as he is patron of all three organizations.

After breakfast, we sat outside as Webb smoked one of his hand-rolled cigarettes and imparted some of his more colorful experiences. One winter, in Fargo, North Dakota, he encountered temperatures of -40 degrees. “A cop came up to me and said ‘You’ve gotta get inside,’ and so I told him I was homeless. He asked me if I had any beer and I said that I did and I’d be drinking it soon,” Webb smiles as he recalls the story. “He came back an hour later, asked me ‘Drunk any of those beers yet?’ ‘Yeah, I had a few,’ I said and he took me into detox and let me spend the night.” In the morning Webb walked out of detox, well-rested and without another blemish on his record. “That was a nice thing for them to do.”

Clint Coggins is a 25-year old reader/writer/denizen of Iowa City. Contact him at clint_coggins@msn.com