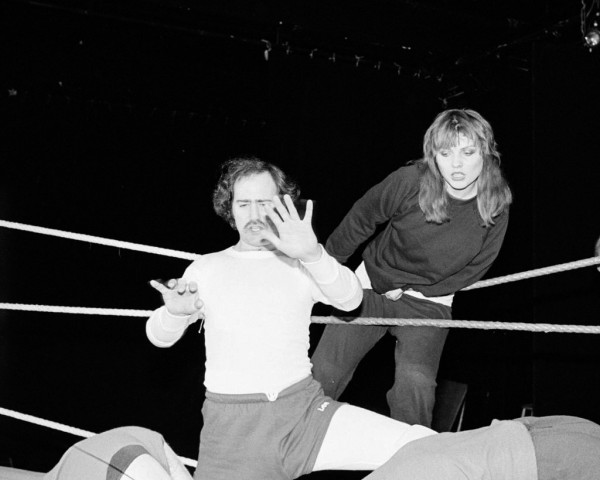 Early in Andy Kaufman’s career, the comedic performance artist sometimes opened for musicians—including, implausibly, schlock-popper Barry Manilow and R&B greats the Temptations. The latter group’s predominantly black fan base wasn’t feeling his inept Foreign Man routine, so they unleashed an avalanche of boos as he wept uncontrollably. Kaufman then pulled out a large cap gun, walked behind the curtains, fired the pistol into the microphone, and thudded to the ground.

The audience had come to hear “My Girl” and “Just My Imagination,” so this was not exactly what they paid for. The Temptations reportedly “sang extra hard that night to make up for it.” Kaufman caused a similar reaction when warming up for Barry Manilow’s white bread audience a couple years later. He had such an effect on the crowd that the crooner said it was all he could do “to try to bring them back from the edge of revolution.”

As you can tell, Kaufman specialized in troublemaking. During his 1981 appearance on a short-lived Saturday Night Live rip-off named Fridays, he broke character and mumbled he couldn’t play along anymore. Michael Richards—one of only two people who were in on the prank—got up and threw a stack of cue cards at him, and then a fight broke out between Kaufman and the cast and crew.

When invited back to host the next season, he claimed to be a Born Again Christian who was now engaged to Kathie Sullivan, a gospel singer from The Lawrence Welk Show. He reintroduced television viewers to the benign Andy Kaufman, who now wore a three-piece brown polyester suit and sported neatly trimmed hair. Remarkably, he only antagonized the audience once. Right before a performance by The Pretenders, Kaufman gave a lecture on clean living, delaying the start of the song.

When he appeared as the boorishly unfunny lounge lizard Tony Clifton, Kaufman remained unrecognizable in a fat suit, sunglasses, wig and prosthetic makeup. In 1981, Clifton sent an audience over the edge while opening for Rodney Dangerfield. Rolling Stone reported that after arriving twenty-five minutes late he insisted that he would not perform until all cigarettes were extinguished, putting the crowd in a rotten mood. When Clifton finally strutted onstage he lit up a cigar and warbled his rendition of “I Left My Heart In San Francisco.”

All hell broke loose. As he plodded on with the next number, “Yankee Doodle,” people launched tomatoes, eggs and a banana cake that splattered on the Clifton’s shoulder. On cue, he shouted, “Drop the net!” A protective barrier came down as someone screamed, “YOU SUCK!” And when Clifton dedicated “this song to the hostages,” someone shot back, “THEY SHOULD TAKE YOU HOSTAGE!”

Then a coin flew through the net and barely missed his ear, so Clifton donned SFPD riot gear—complete with a microphone mounted on the helmet—and continued singing: “… stuck a finger in his ear and called it macaroni!” After an apple ripped through the netting and exploded on Clifton’s helmet, he spent the remainder of the show berating everyone from the wings. The promoter Bill Graham, who booked the chaotic final Sex Pistols gig not long before, had never seen anything like this.

When Kaufman was offered a posh job on Taxi, he refused to sign on unless Tony Clifton was given a guest star turn, with an option for two more. After the show’s producers caved, they were horrified to find that Clifton could not act, was rude to other actors and strutted around the set with a prostitute on each arm. He was escorted off the studio lot while screaming, “I’ll sue your fucking asses! You’ll never work in Vegas again!” Kaufman showed up to work the next week as if nothing had happened, which further irritated the cast. “I don’t know if I’d want to go through that again,” Danny DeVito grumbled. “We all felt it was a big waste of time.”

This wasn’t the first time Clifton had been thrown off a television set; he was also ejected from The Dinah Shore Show after a cooking demonstration gone awry. She often had guests cook up their favorite dishes, but the rogue performer surprised the hostess by tossing a whole stick of butter in the frying pan and crushing a dozen eggshells in her hands. “Do you know who I am?!,” Clifton yelled as security dragged him out. “I’m a big star!” Jean Stapleton, who played Edith Bunker on the 1970s sitcom All In the Family, locked herself in the greenroom with another guest, David Copperfield. The magician recalled, “she was weeping and sobbing when all the pandemonium broke loose in the studio. It was amazing.”

Tony Clifton could be mean-spirited, in an over-the-top cartoonish way, but this was an anomaly in the pantheon of Kaufman characters. His Foreign Man confounded nightclub audiences by transforming from a bumbling entertainer to a spot-on Elvis impersonator. “I come down tonight from downtown Wisconsin,” he would say in faintly Slavic-sounding accent. When the crowd tittered nervously, he shot back, “No, no. Wait teel I give you thee punch.” Catch a Rising Star comedy club owner Rick Newman recalled: “I really didn’t know he was putting me on. He did Foreign Man until the audiences were booing and walking out. But then suddenly he broke into his incredible Elvis imitation and caught us so completely by surprise that we ended up crying, we were laughing so hard.”

Soon television producers were inviting Foreign Man on the air. His 1978 appearance on The Dating Game pitted the hapless character against two quintessential ‘70s studs: a bearded man with a wide-open lapel draped over his hairy chest, and another who was tanned, permed and suited up. “How ya doing Patrice,” Studs #1 and #2 said with smooth confidence, while Foreign Man let out a meek, “Hee-lo Pat-reese.” After creating all kinds of confusion, he broke down in tears when Patrice picked Stud #2. Foreign Man insisted that he had answered all the questions correctly, and therefore should win the contest.

After this health-food nut and non-smoker was diagnosed with a rare form of lung cancer at the age of thirty-five, many were sure it was another one of his pranks. “Andy, come on man,” people would say to him as he sat in his wheelchair. “This dying thing is just too much!”

Kembrew McLeod lives in Iowa City, and plans to be fighting ninjas throughout the month of May.