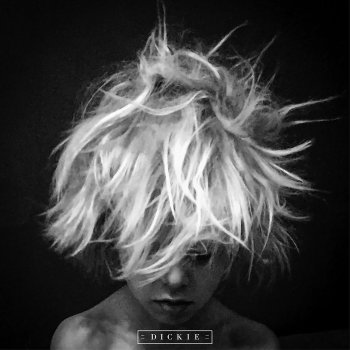 Since 1998 Dick Prall has been spinning his particular flavor of “sad bastard” pop music (to quote Barry from the film High Fidelity). A couple of brilliant power pop releases, a few polished singer-songwriter releases (including a minor hit “The Cornflakes Song” with Glen Phillips of Toad the Wet Sprocket) and now he’s back with a new project called simply DICKIE.

DICKIE has the introspective pop we’re used to from Prall-—the head-hanging desperation, the wistful turn-of-phrase, the hopeful wishes all delivered in a brigade of earworm-wrangling hooks. Kristina Priceman’s violin recalls both Buddy Holly’s final studio sessions (“Pop Pop Pop” reminds me of “Raining in my Heart”) and The Beatles string work in 1965’s “Yesterday.” The addition of strings represented a landmark of maturity in their respective canons as it does for Prall. Priceman’s sawing arpeggios add a fresh light and complexity to the proceedings which serve both to give a common tone to the whole album as well as underscore the emotion of Prall’s vocals.

DICKIE is an autobiographical song cycle with each song representing chapters in his life starting with his birth in “Forty-Five” (which is enjoying airplay on KRNA) ironically asking “is this the end of it all?” and ending with “In These Shoes” where he’s mustering up courage to talk to a girl.  “I want to stand by you, girl, but there’s not a tread that moves me through the room.” In between is a discernible struggle by Prall to make sense of a past dotted with loss as well as build up to the promise of a better future.

Prall is a songwriter of the caliber of my very favorite members of the Bruised Hearts Club—the late Elliott Smith, the aforementioned Glen Phillips, Ben Folds, Cat Power, and Sufjan Stevens. With Priceman as partner in composition and foil to his moodiness DICKIE is a team that has produced one of my favorite albums both in Prall’s catalog as well as this year.

This article was originally published in Little Village issue 181