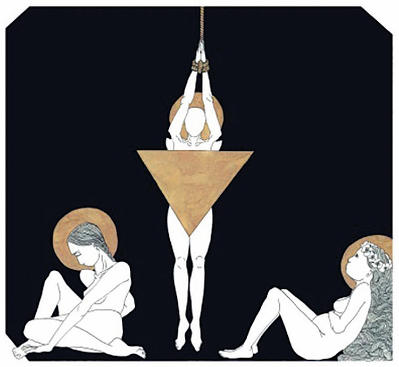 Quad Cities producer and engineer Patrick Stolley has been releasing albums as The Multiple Cat since 1994 with a rotating cast of sidemen. Stolley is one of the founding members of Daytrotter and still contributes with sessions from his own FutureAppleTree studio. After a few albums and singles released in the late nineties, Stolley came back in 2013 with the aptly-titled The Return Of, which represented a retooling of the band, and, in my opinion, a refining of the sound.

Thankfully, we didn’t have to wait as long for the new album, titled Intricate Maps, which continues in the same vein.

Stolley likes to build up songs from pieces. Speaking with the website First Order Historians about beginning the latest album, Stolley said, “I will likely just do what I always do and record to a click and overdub everything. I like the way things evolve that way.” To that end, Intricate Maps is a fascinating headphone experience—it’s easy to get lost in lots of levels of instrumentation and audio artifacts. Stolley’s soft vocals are passionate and reaching, riding unabashedly hook-laden melodies.

Intricate Maps is an angular and staccato mosaic of elements from the best of New Wave and College Rock. The lead track, “Maps,” has a syncopated guitar rhythm that recalls early Police (“Roxanne” comes to mind). The synthesizers and pianos remind me of The Cure at their poppy best. Layers and layers of delay we’ve not heard since anyone cared about U2 wash over the guitars. Track six, “The Boring Game” is anchored in electronic sequencers that wouldn’t sound out of place on a New Order album.

It’s tempting to suggest that Stolley’s use of these elements makes Intricate Maps somehow retro. However, this stitched fabric of sound is more than the sum of its parts. It is a polished work that both honors the tradition of alternative rock and puts a current spin on it with Stolley’s signature production work. In the same interview he said, “Make the sounds count. That’s what turns me on.” The sounds on Intricate Maps turn me on, too.

This article was originally published in Little Village issue 192.