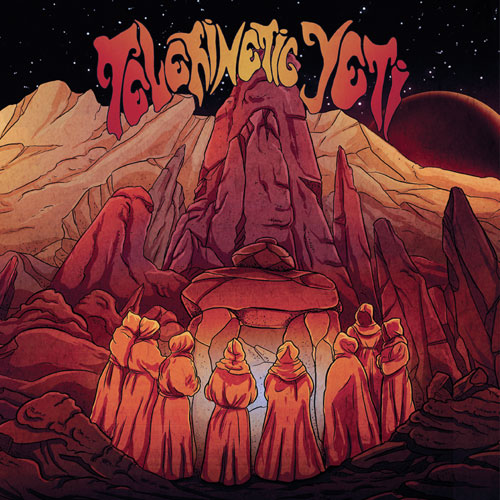 Occasionally, a recording reaches out of the speakers and grabs you — shakes you — doesn’t invite but demands that you trip with it along whatever imagined pathways it produces. Abominable, the first full-length release from Dubuque’s Telekinetic Yeti (out on Sump Pump Records March 17) may just be the first such album of 2017.

It is both impossible to believe that Telekinetic Yeti is a two-piece, and impossible to believe that it could be anything but. The unity and clarity of vision that Alex Baumann and Anthony Dreyer have developed together in such a short time (the band formed just two years ago this month) is intimate and grounded—but the breadth of sound that the duo achieves belies that intimacy, even while it relies on it.

This record is far greater than the sum of its parts; the production on Abominable (recorded at Flat Black Studios and mixed by the untouchable Luke Tweedy) is full and delicious. Driving and deliberate, Abominable hearkens back to classic stoner metal, but with intricacies of sound that invite even space rock comparisons. Even on more straightforward tunes, like “Stoned and Feathered” (which the band released a video for on New Year’s Day), there are twists and tricks that tease a deeper musical throughline.

The eight-plus minute instrumental, “Colossus” (track four), is where the album really finds its place. Dreyer’s drumming on this track is phenomenal. It would be trite to call this “epic,” but the storytelling (on all of the instrumental tracks, but especially here) is so damn solid that you’ll feel like you just read some ancient poetry. The journey “Colossus” outlines is complete enough that, if you’re listening digitally, instead of on record, then track five, “Lightbearer” (which kicks off side B of the LP) can catch you off guard.

Abominable is a record to get lost in. It’s the musical equivalent of jumping in a van with three or four of your closest friends and driving until you have no idea where you are anymore. From the rev up into the opening title track to listening to the gravel fall off the edge of the mountain as you skid to a stop at the end of “Himalayan Hymn,” this is a trip you don’t want to miss.