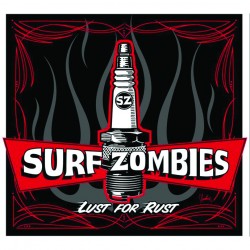 My dad tells a story about seeing the seminal surf-rock band The Ventures at the Melody Mill Ballroom outside of Dubuque in the early 1960s. He happened upon a comb on the sink in the bathroom left by the band. He picked it up and shortly after sold it still dripping with pomade from the pompadoured greasers to a collection of girls spellbound by the band.

Brook Hoover first heard surf music when his uncle played part of “Pipeline” by the Chantays on a guitar for him at age 14, and from then surf music would be a staple in the music he made. The latest Surf Zombies record, Lust for Rust, finds Brook with a newly-minted lineup that adds Ian Williams (The Wheelers) on guitar and Tyler Russell on drums to the band along with longtime bass player Joel McDowell.

Songs by The Ventures, the Surfaris, The Chantays, Dick Dale and others serve as the template for decades of surf rock. Lust for Rust also follows these templates: galloping rhythms, BIG reverby tremolo guitar; but updates the sound with the occasional edgy distortion thanks to some influence by Williams, who also produced the album.

I have memories of laying on the floor in front of the large console stereo staring at the beautiful girls on the covers of the records dad spun by The Ventures. The raw energy of the tribal drums and the blistering guitar soundtrack seemed at once electric, sexual and forbidden. This intersection of rock music with our baser instincts exists in its purest form in instrumental guitar rock. I thank The Surf Zombies for giving me another album full.