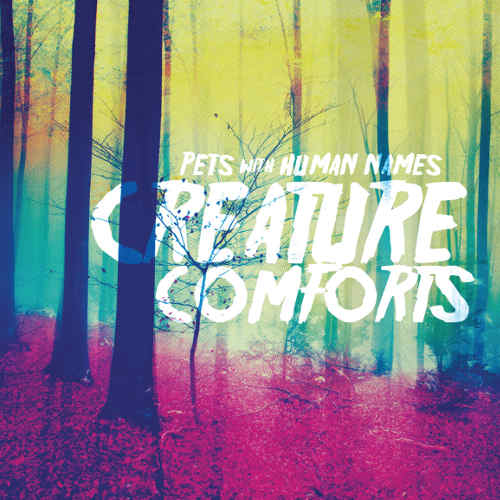 Creature Comforts, the 2017 sophomore effort from Des Moines three-piece Pets With Human Names, is a tight, solid, confident rock and roll album. The band — Alex Nickeson, Andrew Pierson and Benton Schoenrock — recorded the 10 tracks at Flat Black Studios for a driven, polished disc that will make you want to throw it on repeat.

There’s a lot of experimentation happening on this album. Unlike their 2014 self-titled debut, a raucous throwdown that really locked in their sound, Creature Comforts takes a step forward by plugging some stylistic motifs into myriad aesthetics. The album foregrounds the wide variety in the band’s influences, and exhibits a playfulness and self-assuredness that make it impossible to dismiss.

Foremost among the throughlines on the album is Schoenrock’s drumming. His playing is relentless — frenetic, even, at times — and its persistence is key to the band’s style. Even when he’s indulging in some experimentation of his own (notably, on “Temple”), there’s a consistency to his drumming that is truly defining.

The album’s trippy opening tracks — “Crystals,” “Terracotta” and “Magenta” — are a real highlight of the whole. “Terracotta,” which has some of the more intriguing vocal choices as well as excellent guitar work from Nickeson, is an incredibly patient tune. It’s build-and-break repetition is a perfect lead-up to the delivery of “Magenta.”

It’s album closer “Mirrors” though that’s the real reward. At 6:10, it’s the album’s longest song, but the band makes you feel like they could keep it up forever. They are having so much fun together, pushing each other’s limits, eliciting each other’s best performances. It’s always a blast when an album ends with a long jam like that, because it really makes you feel as though the musicians enjoy the work, not just the end product.

Creature Comforts is an album not just for listening, but for re-listening.

This article was originally published in Little Village issue 235.