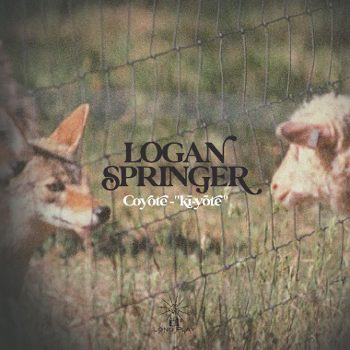 Coyotes tend to howl to locate each other and establish their territory, not only for the sake of those around, but also for themselves. It seems prudent then that Iowa alt-country singer-songwriter Logan Springer titled his full-length debut, Coyote- “kī-yōte”. Engineered and mixed at Flat Black Studios by Luke Tweedy and released in collaboration with Long Play Records, it’s the first full-length album of original songs from Quad Cities-based Springer. He enlisted a few of his friends to flank him on the record, a powerhouse list of local musicians including Murray Lee, Ben Schwind and Phil Dodds.

Leaning on the album’s namesake, this record contains a lot of winter echoes, a lot of white space and long nights roaming it, searching for a place to settle down. The best songs capture Springer contemplating the trying time “before” and the altered “after” of leaving home. His lyrics try to simultaneously stake his claim to the spaces he’s known and justify leaving them all behind. The album’s first two tracks, “Nowhere Fast” and “Best I Can,” are built out of fast cars and bloodshot eyes and hard times that turn “black dirt into sand.” “Foreign” details the singer walking through the fields of his youth, for once back home from the city for something other than “weddings and funerals.”

“Everything Gonna Be Alright” takes up as a modern-day Merle Haggard-style working person’s ballad, full of payday Fridays and skipping out on smoke because the singer’s heard that if you “stub your toe they got some dude that’ll come collect your piss.” And Springer goes for a Springsteen ballad on “End of the Road,” the album’s best song. It’s about that motel at the end of the road with weekly rates. I’m sure you know the one. Maybe you’ve been there too. It’s always raining on the parking lot while the welcome sign flickers its manic Morse code.

It’s the type of song that is several albums old, which makes its inclusion on Springer’s debut all the more impressive, rounding out a complete and sonically diverse alt-country record. That’s never been an easy feat. If Coyote- “kī-yōte” is just Springer’s beginning, born out of and produced during an endless pandemic winter, it’s a first howl worth hearing.