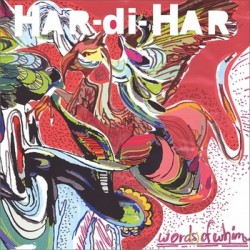 Few things excite me as much as stumbling upon a new band. The discovery of unexplored territory is a time consuming, but happy distraction for me, so I often click through on the Facebook pages of unknown bands when I see they were “liked” by someone else in my feed. This Fall, one of my most notable social media finds—thanks to Abby Sawyer, of Bermuda Report—was Cedar Falls husband-and-wife duo Har-di-Har (Andrew and Julie Thoreen).

On my first listen, I was immediately struck by their beautiful vocal melodies and harmonies. My mind raced and reached for comparisons to music that has come before—the 70’s British prog-folk band Renaissance (particularly the epic track “Ashes are Burning”)? The slinky bass guitar and choral harmonies of Minneapolis band Trip Shakespeare (from which came Semisonic, of “Closing Time” fame)? A retooling of The Beach Boys, a la Grizzly Bear or Fleet Foxes? To continue the comparisons, at times Julie sounds like Grace Slick’s folkier forays in Jefferson Airplane (like on the song “Lather”), while at other times delivering vocal glissandos that remind me of Dolores O’Riordan of The Cranberries. 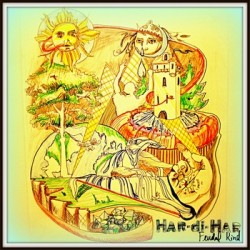 The sum of all of this? The Har-di-Har EPs are surprise, twelfth-hour, darkhorse contenders for my list of favorite releases from 2012. Their music is an airframe of jazz vocals—harmonies and solos—flying through the spare, syncopated turbulence of drums, over a landscape dotted with trombone, bass, guitar and keyboards. The vocals are what keep me transfixed on the sky. Julie and Andrew Thoreen have pitch-perfect harmonies that could only come from being partners in life—they jokingly refer to their music style as “D&V”—drum and vocals (as opposed to “D&B”—drum-and-bass electronica).

If you think you would like the D&V sounds of Har-di-Har, but would like a custom crafted sample made just for you, the duo offers commissioned songs for $55, with $5 going toward a music charity). Find the details at Hardihar.com/store.

As for the two EP’s, they really belong together; I recommend buying both from the Har-di-Har website in a nifty USB stick release or as downloads, available on their Bandcamp site. According to Andrew, there will be a third EP coming out in the next year before the band begin work on their first full length recording.

Michael Roeder is a self-proclaimed “music savant.” When he’s not writing for Little Village he blogs at playbsides.com.