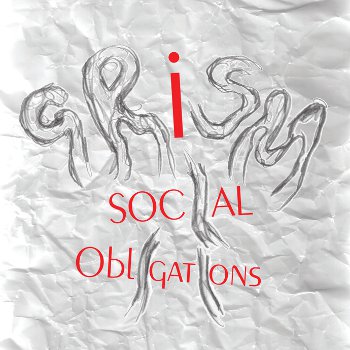 Even though Grism is a vehicle for Zach’s indie-pop song writing, Grism’s sound—a splashy melange of Superchunk, Unrest and Dinosaur Jr.—comes as much from the women in the rhythm section as it does from Zach, something he’d be the first to tell you. Rachel and Kate have been playing rock music together for nearly half their young lives; they’re a well-tuned punk-rock machine. Give them the chords, wind them up and they’ll sound huge. Grace’s drumming is solid and energetic while subtly underlining the song structure.

The album’s opener “Invoking Mr. Robinson” is an explicit homage to Unrest’s Mark Robinson, a quietly sung, wistful song which doesn’t prepare you for the chunky (Superchunky?) fuzz-rock of the rest of the album. The track “Relentless” serves as a declaration of principles for the rest of the songs. “If I should die I would hope to stay that way otherwise life would always stay relentless.” Zach’s lyrics reflect a comic disorientation, prone to flights of cartoonish fancy, concerned with making sense of a crazy world: “I read a book and it seemed to contain what I’m after, but on second look, couldn’t find that particular chapter.” Some of the best moments are when words fail him and the band launches into ‘la la’ call-and-response choruses. Grace, Rachel and Kate sound like they’re eight years old, in the best possible way.

The album sounds like the one playing in Zach’s head 20 years ago, embracing and extending the vision of his indie-rock heroes. It’s executed with the skills of enthusiastic grownups but with the wide-eyed enthusiasm and untethered imagination of children. And who wouldn’t want to hear the music that was playing in their heads when they were 12?

Full disclosure: I’ve known the Grism-ites for years and done some audio production work for them, but until we outsource our album reviews to Mumbai you’ll just have to factor in a certain lack of detachment in my reviews.