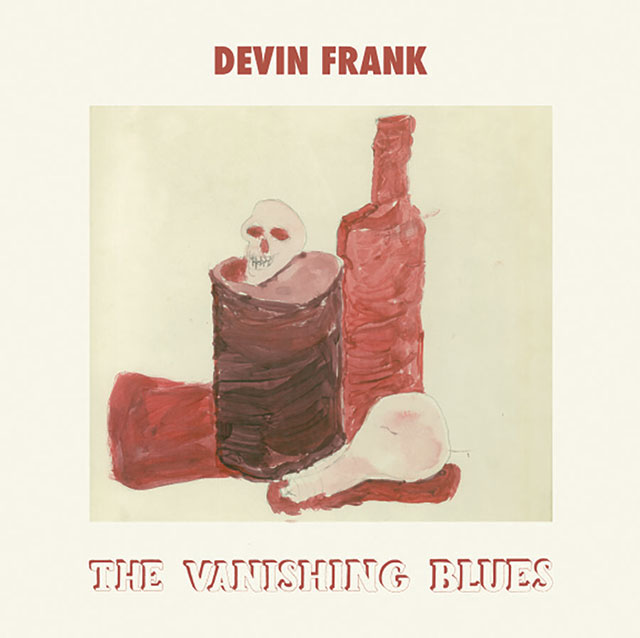 Poison Control Center’s hiatus in 2011 gave Devin Frank time to explore new projects. He formed Mantis Pincers with Jordan Mayland and Eric Moffitt of Volcano Boys and released one cassette. He moved to Columbia, MO in 2012 and, while writing a bunch of songs and demos, he joined the music scene there as part of heavy psych rock band Flïïght and country psych band Jowlz. In 2014, he formed the Vanishing Blues Band with members from both of those bands and Steph Foley, also from Columbia.

Those songs form the basis for Frank’s debut solo album The Vanishing Blues, on Cartouche Records. The album is a swirling loose-knit haze of psychedelic folk with flute, harmonica and percussion. At times the tracks are lazy hallucinations. With lyrics like “mermaids, harpies, the covetous whispers, arthropod tentacles, the catfish whispers” from “Moonlight of the Night,” there are no helpful signposts to guide you, so it’s best to go along for the ride, enjoying the alliterative poetry.

By far, the song I play most on repeat is track 3, “The Bitter Tears,” the standout rocker on the album, infused with vibes of Robyn Hitchcock’s the Soft Boys and a little of the paranoid desert punk of the Meat Puppets. The song charges like a runaway train, the instruments and vocals rushing the beat in this fever dream about conflicted love. “But you don’t understand and you don’t even try, It’s like a hook in the mouth when you look into my eye. I get so sad I just can’t believe it, I get so sick I start to think of leavin’, maybe I should just turn that ship around” (or ” … turn that shit around;” I hear it both ways). By the guitar solo, the song is threatening to fly off the tracks — but, eventually, it comes to a rest, allowing the listener to mop their brow and continue the trip.

With The Vanishing Blues, Frank has made a refreshing stylistic statement by using a sonic palate derived from psychedelic rock’s dawning era — using bits of Syd Barrett, Donovan and the Zombies. This makes the album a delightfully unique and compelling standout in the landscape of releases this year. It will be interesting to see where Frank takes his music next.